History
On commissioning she became part of the 8th Frigate Squadron. Her first commanding officer was Captain Mike Gregory. Captain Gregory, a submariner, was previously awarded the OBE for the longest continuously submerged patrol in Royal Navy history.

The ship's first two deployments were to the US and Canada, in 1989 and 1990 respectively. The first in 1989 called at both Fort Lauderdale and Baltimore where the ship became the focus of an anti-nuclear protest over suspicions that the ship carried nuclear weapons. In 1990, she again crossed the Atlantic to visit New York, before sailing North to the St Lawrence Seaway with a brief stop in Montreal followed by a 10-day visit to Toronto. This was followed by an unscheduled 24-hour stop in Halifax, Nova Scotia to repair some ship equipment damaged in bad weather, and then a visit to St Johns, Newfoundland.

She spent the winter of 1990–91 as the Royal Navy surface vessel patrolling the Falkland Islands. She sailed to South Georgia just before Christmas arriving at Grytviken on 22 December. She sailed along the coast of South Georgia and returned to Grytviken on Christmas Eve. On Christmas Day she hosted the soldiers of the South Georgia garrison aboard for Christmas Day lunch of venison. The stag had been shot the day before by a sniper from the garrison; part of the garrison's duties being to control the deer population on the Island. While in South Georgia the ship manoeuvred into Cumberland Bay where a glacier sweeps into the sea. A photograph of the ship with the glacier as a back-drop was taken from the ship's Lynx helicopter. Ice was collected from the glacier and kept in the ship's freezers for use at cocktail parties during the return leg of her patrol.

On 26 September 2000, Cumberland worked with local fishermen to aid the rescue of survivors of the Greek ferry Express Samina which ran aground two miles off the island of Paros.

In 2003 Cumberland embarked two teams from M Squadron, Special Boat Service (SBS) and (in partnership with RFA Wave Knight) seized 3.6 tonnes of cocaine in the mid-Atlantic as part of an anti-drug operation. In October 2005 she intercepted and boarded a speedboat in the Caribbean Sea off Nicaragua from which they seized two tonnes of cocaine, and detained four suspects. The cocaine was estimated to have a street value of £200 million.

During this time Chris Cranmer, the first registered Satanist serving in the Royal Navy, was a technician on board the vessel. On 18 May 2006 Cumberland escorted Dee Caffari, sailing Aviva, across the finish-line (at Lizard Point) as she became the first woman to sail single-handedly non-stop around the world "the wrong way" (against the prevailing wind and tide).

Cumberland completed an 18-month refit in 2008.

In October 2008, Cumberland was assigned to anti-piracy duties along with 6 other ships as part of Standing NATO Maritime Group 2 (SNMG2). As part of her duties in SNMG2, on 11 November 2008, Cumberland went to the aid of a Danish vessel that had come under attack from pirates. The pirates opened fire on two of Cumberland's launches; 3 pirates died when the Royal Marines returned fire on the dhow.

During her 2010 deployment to the Persian Gulf, Cumberland rotated between maritime security patrol duty and escort duty with the French nuclear-powered aircraft carrier Charles de Gaulle in support of coalition military operations in Afghanistan. This represented an example of interoperability pursuant to the recently ratified Franco-British defence co-operation treaty.

In February 2011, it was announced that the ship would be scrapped in April 2011 in a government spending review to meet UK government cuts to the MOD.


Decommissioning and disposal
On 18 April 2011 Cumberland made her final entry into her base-port of Devonport from an intense and successful patrol involving oil production protection in the Gulf, counter-piracy operations, evacuating refugees from Libya and enforcing an arms embargo against the country's ruler. The ship was decommissioned under the Strategic Defence and Security Review, with a decommissioning ceremony taking place on 23 June. She was laid up at Portsmouth and in July 2013 sold to Turkish company Leyal for demolition. 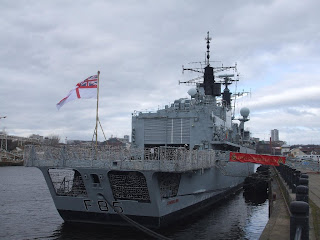 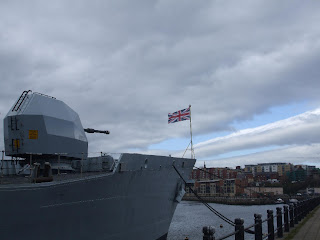 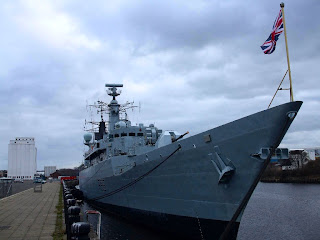 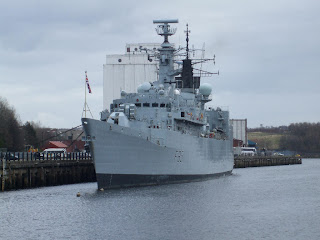