Residents who waited 26 years for their street to be resurfaced were astonished when the council left it looking like this.

The work was undertaken on Adderstone Crescent, Jesmond, Newcastle, and cars were moved off the street so tarmac could be put down.

But a white Volvo was left, and council workers left it on an island of old road covering.

Taken from Chronicle Live. Read the rest of the story here Jesmond resurfacing work is left half finished. 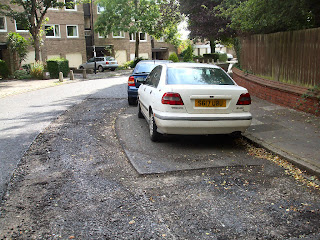 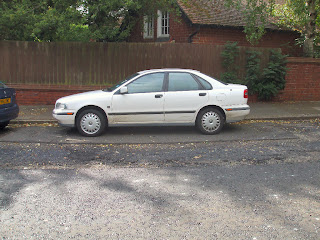 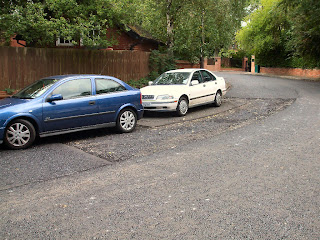 See my other photos around Jesmond:

I used to live in the house shown behind the white Volvo in these photos (you can just see the garage). It is called "The North Cottage" and it is No.14 Adderstone Crescent".

I lived there as a child, with my parents.

So, the Evening Chronicle article in 2009 states (a resident saying) "we have waited 26 years to get this road re-surfaced".

So, that is probably the next time after 1965 that Adderstone crescent was re-surfaced . . . now there is a bit of a useful (?) history timeline for you!

Quite a few roads in Newcastle used to have a nice RED road surface. The most famous being the 'Great North Road' stretch, through the Town Moor.

It is a pity Newcastle lost all its "Red Roads"!

Thanks, interesting stuff.
I reckon it may be time to pay another visit to see if it has been fixed up.

I'd forgotten about the number of red roads we used to have!