HMS York was a Batch III Type 42 destroyer of the Royal Navy. Launched on 20 June 1982 at Wallsend, Tyne and Wear and sponsored by Lady Gosling, York was the last Type 42 ordered. The ship's crest was the White Rose of York, and the "red cross with lions passant" funnel badge was derived from the coat of arms of the City of York. With a maximum speed of 34 knots (63 km/h; 39 mph), she was the Royal Navy's fastest destroyer.

1985-1990
In the summer of 1990, HMS York was serving on a routine patrol in the Persian Gulf as part of The Armilla Patrol which had been undertaken by a series of Royal Navy warships over many years. On 2 August that year, Saddam Hussein's forces invaded Kuwait. Instead of heading off to the Far East and Australia for series of "waving the flag" port visits, she remained on patrol in the Persian Gulf for an extra three months. This period was conducted when at sea mostly on a war-ready footing, involving virtually everyone onboard working Defence Watches (basically six hours on, six off) round the clock.

1990-2000
Following refit at Rosyth, York rededicated on 30 June 1995 and then worked up to full readiness undertaking operational sea training and a JMC. She then deployed to the Far East and Middle East with visits to Malaysia, Bangladesh, Oman, UAE, Kuwait, Saudi Arabia and Qatar.

In 2003, York took part in the invasion of Iraq providing air cover and area protection for the aircraft carrier HMS Ark Royal. In 2004, she was fitted with the MOD 1 variant of the mark 8 4.5-inch gun. She and Edinburgh were the only two Type 42s to be so fitted.

In July 2006, York joined Gloucester in evacuating British citizens from Beirut in the 2006 Israel-Lebanon conflict making several trips in and out of Lebanon, ferrying evacuees to Cyprus.

In February 2010, York and the auxiliary Wave Ruler were deployed to the Falkland Islands coinciding with a period of increased tensions between the United Kingdom and Argentina over the former's plans to begin drilling for oil in the seas surrounding the islands.

2011-2012
In February 2011, York was deployed to Malta to assist in the evacuation of British nationals from Libya. On 21 April 2011, York arrived at the East Cove Military Port in the Falkland Islands, beginning patrol duties for the islands. On 12 December 2011, York spotted the Russian aircraft carrier Admiral Kuznetsov with its carrier group northeast of Orkney, off the coast of northern Scotland, and shadowed the carrier for a week. This was the first time Admiral Kuznetsov had deployed near UK waters and the closest in 20 years that a Russian naval task group had deployed to the UK. She then sailed around the top of Scotland and into the Atlantic past western Ireland, where she conducted flying operations with her Sukhoi Su-33 Flanker jets and Kamov Ka-27 helicopters in international airspace.

On 13 April 2012, Edinburgh fired the last ever operational Sea Dart missiles after a thirty-year career. As such York completed her career without the system being operational.

York entered Portsmouth harbour for the final time on 20 September 2012, and was decommissioned on 27 September 2012. In August 2012, the ship was put up for sale. 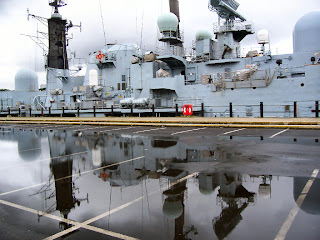 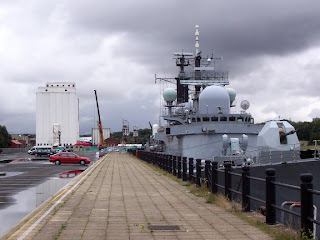 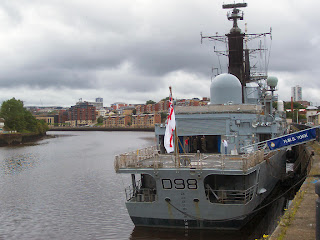 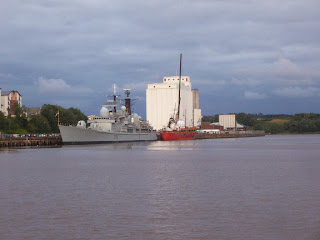 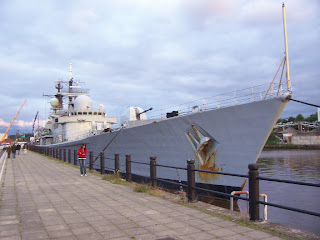 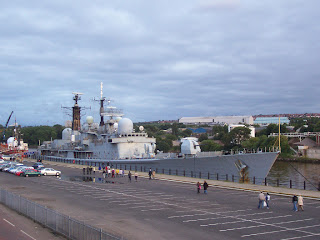 The HMS York at around 30 knots during full power trials.