Derwent Tower (also known as the Dunston Rocket) is a 29-storey residential apartment building in Dunston, Gateshead. Due to the tower block's unusual shape, the building was nick-named the "Dunston Rocket" during construction (even before its official Derwent Tower title) and the name has remained with locals throughout its life.

The tower was designed by the Owen Luder Partnership on behalf of Whickham Council who at the time controlled the Dunston area of Gateshead. The original brief was to design three high-rise blocks of at least 22 storeys, but due to adverse ground conditions on site, the decision was made to build one tower, with the rest of the properties being low-rise blocks of 2 to 5 storeys. Despite the architect's advice against construction of a high-rise building on the site, the council were strongly in favour. Following many consultations and explanatory models of the foundations with specialists, construction of the foundation began in February 1968, and the tower was completed in March 1971.

The construction of the tower was complex because of the very poor ground conditions on the site. The foundations were based on a sunken concrete cassion that was built above ground then sunk over a period of time. Cassion foundations are often found in harbour construction; to find this foundation being used in the 1960s for a local authority tower block was a first, the cassion below the tower was put to use as an underground garage area for residents. The tower itself has a very bold and striking appearance, unlike any other tower block or high rise building in the UK. Derwent Tower is of a Brutalist design and retains lots of design similarities with the Gatesheads "Get Carter car park" also a product of the Owen Luder Partnership. The building houses two-bedroom flats up to the 10th floor, 1 bedroom flats from floor 11 to 29.

The unusual features of Derwent Tower are:

Derwent Tower has been in desperate need of refurbishment for many years, making it unpopular with residents and locals alike. The tower has been allowed to fall into its current run-down state by neglect and lack of maintenance. Reports of services breakdowns, lift failures, water supply faults are all common but are unlikley to be a result of the buildings design or construction methods. In 2007 Gateshead Council decided to relocate residents of the Derwent Tower amid health and safety concerns over the already poor and deteriorating services. The block now stands empty and a demolition notice has been served and work on demolishing the tower is expected to begin in early 2010. 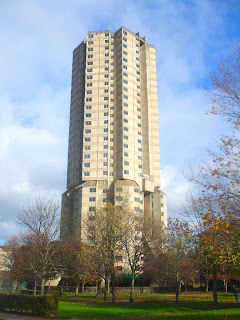 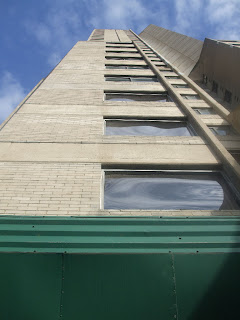 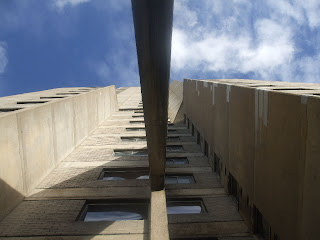 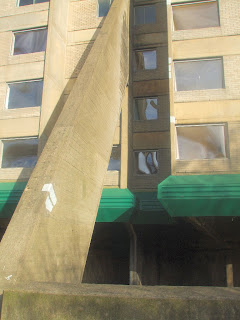 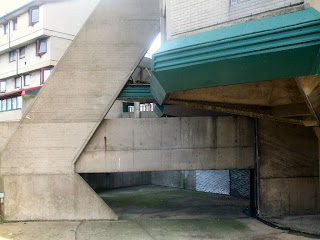 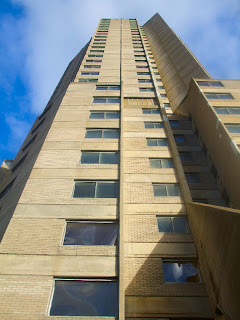 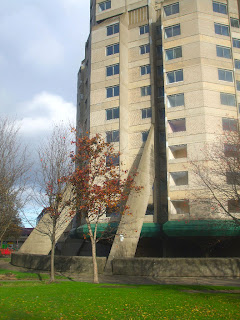 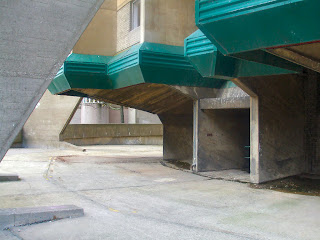 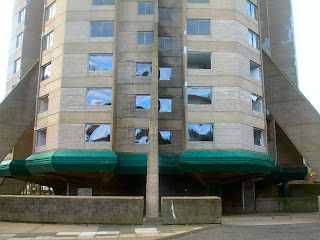 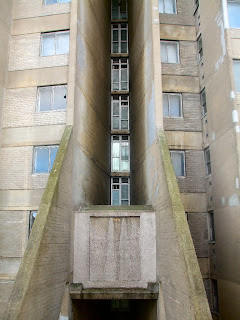 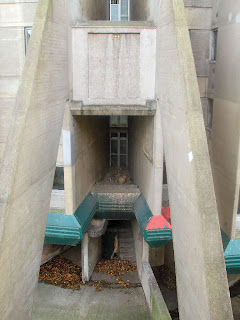 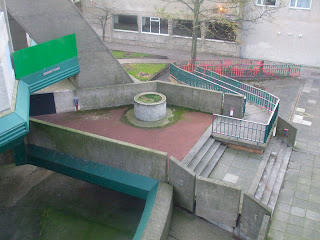 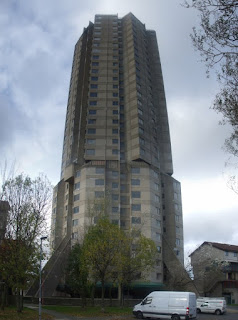 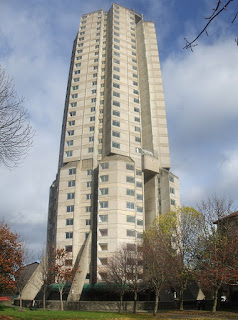 The Dunston Rocket is probably best known through its starring role in a Tudor Crisps advert from the 1970's and 1980's in which a paperboy managed to bribe his mate to deliver papers up the tower, even though the lift was broken, with the promise of a 'canny bag o' Tudor'.

See my other photos around Dunston

and that old Tudor commercial....memories.

Memories was exactly the same word that came to my mind too!
Then I thought about the great flavours of crisps that Tudor made. :)

Love the pics, love the ad, loved Tudor crisps but the building is still a monstrosity and has to go. I have known people who lived in the place and you don't want to know the stories they tell. It was a big mistake and we shall be well rid of it. It should be stipulated in all architect's contracts that they have to live in the buildings they design for at least two years.

I love the pictures, I love the ad, I loved Tudor crisps but the building is a monstrosity and has to go. I know people who lived in the rocket and you don't want to hear their stories. It should be part of architect's contracts that they have to live in their buildings for two years then see how they their designs change.

its horrible, its inhabited by immagrants and doll scum so i say bring it down with the inhabitants in it

Alf is obviously a genius - I couldn't agree more about architects imposing their faddish ideas on us poor people!

I lived in the Rocket for 10 years in the 70s and early 80s and it was a GRRRRRREAT place to live.
The flats were well designed and roomy compared to the little boxes they shove us into now.
We even moved from a 1 bed to a 2 bed when the bairn was born.
The problem was the council didn't maintain or manage the building - letting flats to single teenagers with kids and people off the streets with drink and drug problems. Then after I left the so called "refugees".
When ordinary people who had to get up for work complained to the "rite on", so P.C., council officers (who all live miles away on private estates of course)about an 18 year old who spent all her time at her mothers and just used the flat for all night binge drinking parties with her teenage mates you were being "judgemental".
So to Alf and Nicky with the drearily predictable sterotypical comments of people who never lived there - taint the building pet its the people.
They are probably ruining a low rise estate somewhere (loud parties, brawling in the street, derilict cars and broken washers on front and back lawns).
It is also typical of the dimwitted, unimaginative deadbeats who run the council (councillors and officials) that they didn't even have the brains to flog the Rocket off to a private developer who would have converted it to expensive "apartments" in a gated mini-park and used them to rejuvenate the area - just like ex-council blocks all over the country have been. No we will even have to pay millions to have it demolished - tallk about a bunch of incompetents!The jokes on US!
Oh - and some of the architects of the better designed tower blocks DID live in them to find out how tenants lived and used them. Erno Goldfinger lived in Balfron Tower after it first opened and moved his architectural practice to Trellick Tower when that opened.
Like I said - you should only have let people who WANTED to live there move in........

I agree with rocketman, i lived there for a couple of years and loved it. The flats were quite big and had a fantastic view. It was only until the idiots at the council moved kids in upstairs who had parties all the time, and they once even got fire bombed. After that i thought i could smell smoke all the time. If they move the right people into these places they're nice places to live, and like anything if you don't maintain it, it will inevitably become run down.

I worked for Gateshead Housing Department as a door to door Rent Collector, between 1988 and 2000. One of the places I collected the rents from was the Tower. There were 192 flats in the Tower, but I only collected about a dozen rents in there, mainly because there were a lot of empty properties, as the reputation of the Tower was pretty bad. Anti-social behaviour was rife, leading to decent people leaving their flats and finding new and desirable tenants became pretty impossible. The few people I did collect the rents from were very nice and most of them had lived there since the Tower was built. The Council grew more and more desperate to let properties and so the situation became worse and worse. Anyone could get a flat here. Vetting of prospective tenants fell by the wayside. I thought the Council dealt with the Tower situation very badly and certainly contributed to its' demise. It was managed very very badly. The best thing about the place was the incredible view from the top flats. The worst thing was the rickety lift, which always smelled of urine. Most of the time though, I didn't use the lift, as it was normally out of order, meaning I had to traverse the 29 stories on foot. This was always a joy, especially when the lights were out as well. There I'd be, in the pitch black, carrying my bag with about four grand in it. As a result, this was the only place in the Borough that I felt vulnerable when collecting the rents. Door to door rent collections ended in 1995. I was very sad about it, as I loved this part of the job. I still visited the Tower regularly however, mainly to chase up rent payments, though resident numbers were dwindling by the week. I felt quite sad when the place was eventually demolished. I made a few good friends in there and felt sorry for these people whom, I think, were badly let down by the Council. The Tower was always a talking point, but for all the wrong reasons.

Thanks Big Bongo. A great insight there. It seems the powers that be gave up on the place which was a shame for most residents left there. Seen similar things happen this side of the water too. Thanks again.