Angel Of The North

The Angel of the North is a contemporary sculpture, designed by Antony Gormley, located in Gateshead, Tyne and Wear, England.

Completed in 1998, it is a steel sculpture of an angel, 20 metres (66 ft) tall, with wings measuring 54 metres (177 ft) across. The wings are angled 3.5 degrees forward to create, according to Gormley, "a sense of embrace". The angel, like much of Gormley's other work, is based on a cast of his own body. It is Britain's largest sculpture, and is said to be the largest angel sculpture in the world.

According to Gormley, the significance of an angel was three-fold: firstly, to signify that beneath the site of its construction, coal miners worked for two centuries; secondly, to grasp the transition from an industrial to an information age; and thirdly, to serve as a focus for our evolving hopes and fears.
Work began on the project in 1994. Gateshead Council secured funding of £800,000 - £584,000 from the Arts Council England, £150,000 from the European Regional Development Fund, £45,000 from Northern Arts, plus private sponsorship. The Angel was installed on 15 February 1998.

It was made in three parts—with the body weighing 100 tonnes (98 long tons; 110 short tons) and two wings weighing 50 tonnes (49 long tons; 55 short tons) each—then brought to its site by road. The components were transported in convoy—the body on a 48-wheel trailer—from their construction site in Hartlepool, up the A19 road to the installation site 28 miles (45 km) away; the nighttime journey took five hours and attracted large crowds.

The plaque beside the angel reads "The hill top site is important and has the feeling of being a megalithic mound. "When you think of the mining that was done underneath the site, there is a poetic resonance. Men worked beneath the surface in the dark.... It is important to me that the Angel is rooted in the ground—the complete antithesis of what an angel is, floating about in the ether. It has an air of mystery. You make things because they cannot be said." This writing pays homage to the central idea of the statue to represent the past, present, and the changing times of the nation. 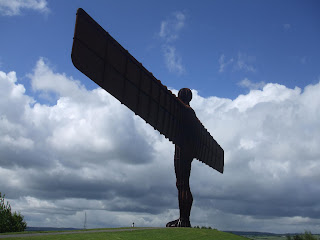 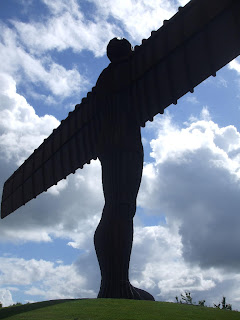 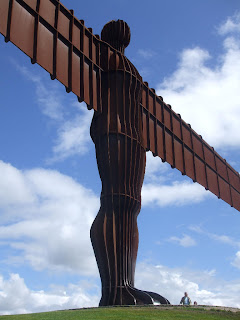 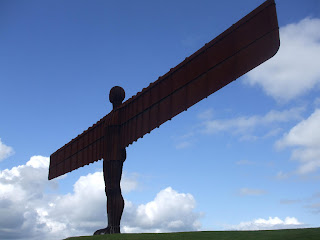 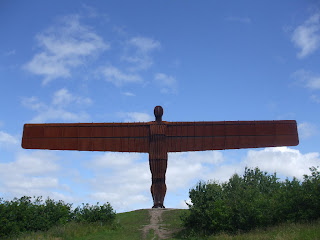 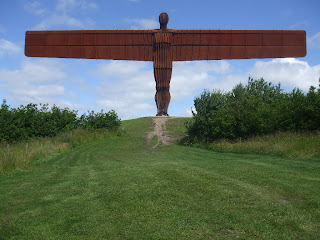 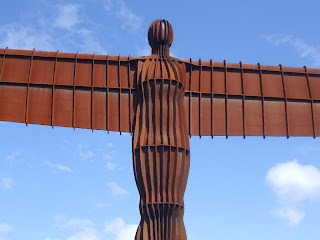 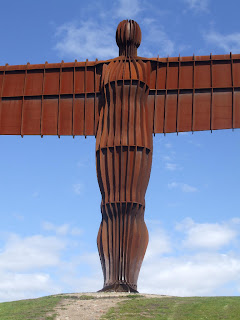 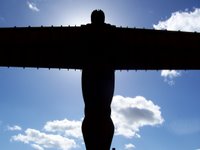 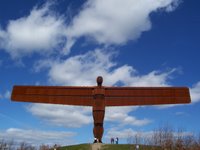 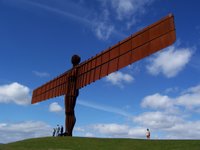 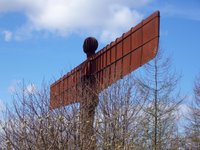 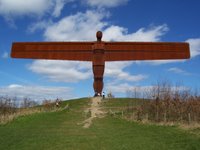 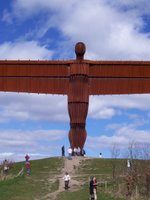 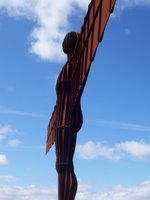 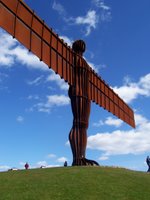 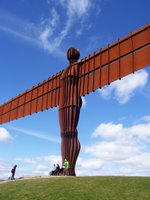 More Information:
See my other photos around The Angel Of The North:

Very good... and with a nice blue sky in the background. :-)

Thanks :)
And thanks for the lift.

Thank you so much for sharing with all of us. Beautiful! No words can say just how much we have all enjoyed these fabulous pictures.

You are most welcome :)